Catalogue of my sculptures:
(electronic or in book form), with some of these texts and poems:

Here are some of my own texts about my thought processes relating to my sculptures – you can download these PDF’s by clicking on them:

It’s a common misconception that the artist gains catharsis through his creativity. Aristotle defined catharsis as the purgation of an audience at the end of a play. The audience, having engaged with the drama, expels its pent-up emotions and finds a state of peace.

Beatrice Hoffman’s sculpture provokes a similar transformation in its viewers. The change is not passive. The figures, lines and shapes ask questions of the viewer, questions that strike at the heart of human experience, intelligence and emotion.

Take Hoffmann’s Etruscan Couples, of which there are two contrasting types. The first couple’s hands and arms are entwined, suggesting a deep bond. Their heads touch together and are inclined skywards. Their torsos conjoin to form one solid rank. These two figures stand united against the world, resolute in their combined strength — the embodiment of solitude and determination. And they speak overwhelmingly of love, be it sexual, filial or the love between close friends.

They contrast with their fellow Etruscans, whose body language is more awkward. The second couple are familiar rather than intimate. They drape an arm around each other’s shoulders, but the gesture looks hesitant. That sense is augmented by the large gap between their bodies, their uneasy posture and the inclination of their heads away from one another.

The viewer knows and understands the Etruscans’ differing moods. No relationship is without its uncertainties; equally, love can be so strong as to tempt Fate to wreck it. We empathise with the two couples in the instant of their triumph or adversity.

Empathy is the word to describe Hoffman’s figurative work. It was present in early sculptures like ‘Squatting’ (1989) and it persists today. ‘Little Goddess’, which dates from 2010, shows the figure of an imposing woman.  She might have been confident in another walk of life or culture, for she is beautiful without being pretty. But she is embarrassed by her height and size. Her head is bowed. Her eyes are downcast. She does not know what to do with her arms: they are wrapped around her stomach, with her restless hands clawing at her forearms and elbows. Her balance is shaky, the consequence of her having placed one foot on top of the other.

The figure is distressed, even fearful. There are clear feminist overtones here. The sculpture makes a firm political point, but in a subtle way that encourages other interpretations. You can look at her and recall when you were uncomfortable in your own skin, and emerge grateful for your greater self-confidence. 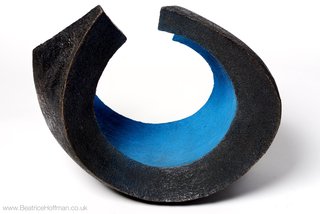 Hoffman’s abstract work provokes reflection, too. It emphasises the physical world without referring to the human body. The sequence titled ‘Waves’ is particularly arresting. The waves are not explosive; instead, they are balanced — like a distant breaker rolling steadily towards the shore, where its full potential will be spent in a few seconds.

It is a short leap from seeing potential in nature to imagining it in mankind. Success ebbs and flows, one’s zenith is short, and nothing can stop the march of time. Yet there is always the unknown, the blank space between the curves of Hoffman’s waves, for solace against life’s depressing certainties.
You feel better for having looked at these sculptures and thought about them; it is a cathartic experience.

Kay Wolf: Your sculptures of heads describe psychological and spiritual states of minds:

Beatrice Hoffman: My series of heads revolve around the psychological themes of human identity, gender and relationships. In this context I am drawn to sculpting in clay, stone or plaster as the most perfect medium to express feelings through form . So many emotional states find a metaphor in the physical nature and demands of sculpture; notions like gravity, balance, cavities, protuberances, directions, angles, surfaces, push and pull all have their emotional equivalent, and can all be exploited to find an equivalent for feelings that are by their nature invisible.

Kay: Your sculpture tell stories. For instance the double heads, with their theme of relationship…

Beatrice: With Sun and Moon, relationship is not yet developed. Instead of man and woman, there is the internal balance within each one of us between male and female. The image derives from fairy tales and myths that tell of celestial constellations. In distinction to most European archetypes, the man on the left is the moon and he looks rather ascetic, while the sun-woman on the right dominates with her round forms. I wanted to use these contrasts, and take the challenge to unite them in one form. 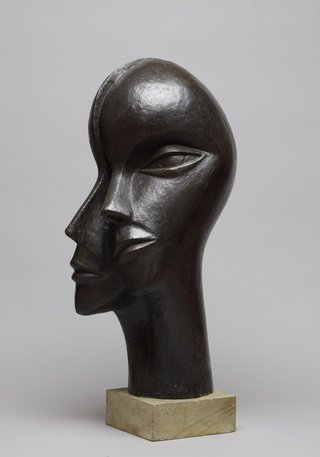 Kay: In Man and Woman, Man and Woman both participate equally in the whole. Yet, if you look closely, you will remark that she is turning away.
Beatrice: Henry Moore inspired me with his topic of relationship – both formally, and emotionally. To describe the whole, he emphasises its parts, and their relationships towards each other.
With ”Man and Woman”, the original egg has split in two halves, and one half is pushing itself over the other – there is a kind of ambivalence. The woman wants to go, and she can’t, or doesn’t – not yet. Movement is frozen, caught in a permanent state of flux.

With Nurturing , there is as similar movement of the right head away from the left. I thought of a human bird chick (on the left), that greedily demands food of its mother – pecking kissing, feeding. The space between the two is cramped. Within their shared closeness it shows need, dependency on the one hand, and the longing to find freedom from the responsibility of care on the other.
Kay: With the sizes of the heads being quite similar, there is ambivalence – are they mother and child, or lovers reproducing that first intense love affair at the beginning of life?

Beatrice: With Mother and Child, I enlarged the abstract, concave space, that both binds them together and holds them apart. This time, the left , larger head inclines towards the other, rather than pulling away. Her hair doubles up as her protective space, in which she cradles the child. This sculpture also incorporates tinges of the adult man/woman relationship – depending on one’s angle of perception. The woman nurtures and protects the man as the son he has once been – and for that, he worships her, raises her to become a saint – the Madonna of Christian history.
Kay: And whether this symbiosis is a mainly happy one, depends on one’s early experiences. There are widely differing perspectives in that, and they are all contained in one sculpture. This explains the various, and individual ways of responding to one single work of art.
Beatrice: With sculpture, you make one fleeting moment, expression, or mood eternal. There might be parallels with the Tibetan Buddhist concept of the “Bardo” – the soul is caught in one expression, one emotional experience, for as long as it is identified with it. Sculpture freezes this moment for us to perceive it better – see it, value it, understand it – and then possibly outgrow it, and let it pass.

Kay: For me it is the Buddha that causes a healing resonance.This sculpture I would love to have standing in my garden, and build a shrine around her…His smile is touching. he could also be a child, a wise child, that does not want to become adult…
Beatrice: Here we do not deal anymore with man or woman, but with human beings. .. There is inner wealth which is emptiness and space.
There is strength in the posture, even if the head is bent forward. This is not defence, or retreat – he stands in the middle of life. But she stops in her tracks – he indicates: what happens outside, is not quite as important as it appears.”

This work shows two faces locked together in the most intimate way, but their gaze is strangely distant. The strength of the work is the tension that exists between the two heads which are bound together. The mother figure angles her cheek to her child in a responsive manner but faces away with her eyes fixed to the horizon.
At the same time the child figure nuzzles the mother, but its kiss is a pout that tells us that it knows that the time for nurturing is over. The nurturer and the nurtured are also the rejecter and the rejected – to encapsulate this using such economy of means is an amazing feat.
It is this that makes the figure truly modern. I love you, says the big head, but its time you moved on – me and your dad have got things we want to do.